Russian football and racism: The case of Egor Sviridov 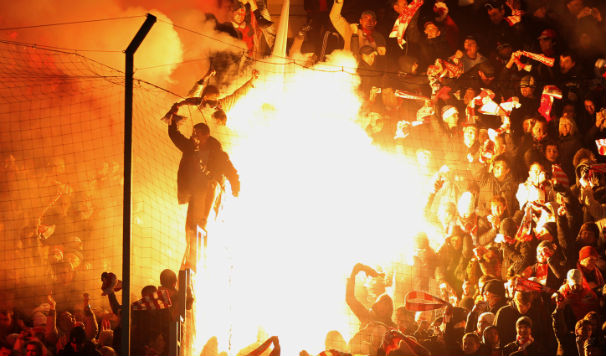 It began with insults being traded by two groups of young men on a Moscow street. It ended with Russian Prime Minister Vladimir Putin publicly laying a bouquet of flowers at a graveside, and thousands of demonstrators taking to the streets across Russia leading to more than a thousand arrests.

Russia has been rocked over the last fortnight by large-scale ethnic tensions, sparked by the murder of Egor Sviridov, a 28-year-old resident of Moscow, by a man of North Caucasian origin - an issue we have visited before in this column.

Sviridov, so the story goes, was bidding farewell to a group of friends in the early hours of 6 December when a group of North Caucasian youths took exception to their behaviour.

Undoubtedly there is more to the story than this - but in any case, a scuffle ensued, during which time Aslan Cherkesov, 26, pulled out a pistol and fired 12 rubber bullets, four of which struck Sviridov. He was pronounced dead at the scene, and another of his friends was hospitalised.

On 11 December thousands took to the streets, not only in Moscow but in at least 14 other cities across Russia.

In central Moscow a crowd of some 6,000 gathered at Manezh Square, adjacent to Red Square and a prominent part of the city centre. They chanted racist slogans - “Russia for the Russians” being a particular favourite - threw missiles at the security forces deployed to control the crowd, and beat up those nearby who were unfortunate enough to resemble those from Russia’s South.

This shocking video chronicles some of the worst excesses.

Russia has suffered its fair share of terrorist attacks - the 2002 Dubrovka theatre hostage crisis, a double bombing of the Moscow Metro in 2004, the Beslan massacres of the same year and another Metro bombing as recently as March. None provoked such a public outpouring of anger and violence.

The Sviridov case is rather different. Firstly, much of the popular ire concerned the fact that, though Sviridov’s murderer Aslan Cherkesov remained in police custody awaiting trial, in the immediate aftermath of the 6 December attack five others from Cherkesov’s party were released by police without charge.

The suggestion was that the North Caucasian immigrants had the police in their pocket, and had paid bribes to escape justice. In the days following the demonstrations three were, perhaps conveniently, rearrested.

And secondly - to answer the question of why this story makes it onto the pages of a fooball website - Sviridov was a fan of Spartak Moscow and was reportedly heavily involved in the club’s Ultras group, known as Fratriya. It is this footballing connection which seems to have provided the catalyst for unrest. Indeed, in some quarters it has been suggested that Ultras across Russia are responsible for organising the recent violence. “Moscow riots expose racism at the heart of Russian football” blared the headline in last Sunday’s Observer.

After the infamous Odemwingie banana banner unfurled back in August, Russian football is once again at the centre of a racism debate, made all the more poignant in coming just weeks after the awarding of the 2018 World Cup to Russia. Is the Sviridov case further proof of an endemic racism problem in Russian football?

It’s true that Russian football fans have history where ultra-nationalism is concerned - though certainly no more than in many other countries.

At matches between clubs from ethnically-Russian cities and those from predominantly Muslim areas of Russia it’s fairly common to hear chants such as “Russia for the Russians”. In the stands the odd person may even shout “I hate khachei [a highly insulting word for somebody from the North Caucasus]”.

In recent seasons some supporters have taken on the habit of waving the old black-yellow-white striped Russian Imperial flag at matches. Used until the late 19th century, it now has ultra-nationalist connotations.

At its worst, this kind of behaviour drags Russian football into the mire. A group of Spartak fans unfurled a banner on Hitler’s 120th anniversary last year wishing their “Grandfather” a Happy Birthday. And the persistent racism of Zenit St Petersburg, particularly their unwillingness to countenance a black player in their squad, is a huge blot on the Russian footballing landscape.

And even fans who don’t necessarily fit the profile of skinhead or neo-Nazi fall into this trap - the chant “Russians onward” is an almost ubiquitous refrain in Russian stadiums. And don’t be fooled into thinking they mean “inhabitants of Russia”, irrespective of race - unlike in English, the Russian language has separate words to specify ‘ethnic Russians’ or ‘those living in the territory of Russia’. The football chant uses the former.

But on the other hand it’s somewhat of a leap from terrace racism to the perpetration of a pogrom on the streets of Moscow.

Fratriya made their own “official” statement concerning Sviridov during their club’s Champions League group match against MSK Zilina in Slovakia a fortnight ago, which they caused to be held up for some 25 minutes after throwing flares and smoke bombs onto the field. It was a spectacular, at times frightening, demonstration, but not racist. Fratriya insist that was their only direct action, and that they played no part in the subsequent unrest at Manezh Square or elsewhere.

“We are in favour of the rule of law and justice,” the organisation said in a press release four days after the riots in Moscow. “Fratriya is sure that taking a socially responsible position will resolve this situation more effectively than any mindless act.” Hardly the words of a politically reactionary group.
And for all the unsavoury nationalism which can be found at Russia’s football stadiums, any outright violence you see is far more likely to involve fans from predominantly ethnic Russian clubs - Zenit fans versus those of Spartak, for example - than between Russians and North Caucasians.

Some Western observers have probably jumped the gun in suggesting that the fallout from the Sviridov murder is clear evidence of a racism problem in Russian football. It is more reflective of the susceptibility of ordinary football fans, given certain conditions, to be manipulated by right-wing nationalist groups in the country - a problem which footballing authorities outside Russia have grappled with for many years.

Prime Minister Putin seems to subscribe to that view. On Tuesday he summoned representatives of fan groups from Russia’s Premier League clubs to the Kremlin, where he delivered a speech emphasising the need for respect between ethnic groups across Russian society, and pointedly citing the need for football fan movements to play their role in upholding these values and policing their members.

“We - by that I mean the government - intend to separate the radicals and extremists [from the fan movements],” Putin told the assembled representatives. For all of Russia’s problems concerning race relations, as far as the events of the last fortnight are concerned we should largely do the same.