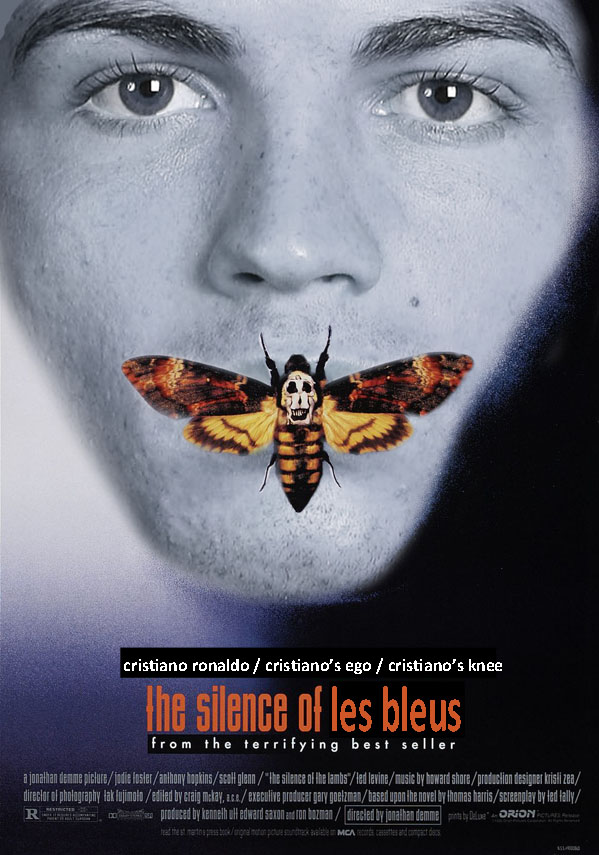 You’re not really a football fan if you laughed as Cristiano Ronaldo collapsed in agony on the Stade de France pitch last night. A bold, some might say biased, statement from a woman who has a Cristiano Ronaldo calendar hanging in her kitchen as she writes this, but bear with me.


Of course France were the favourites. In every sense of the term. After a sluggish opening game, Didier Deschamps shuffled his L’Hommes Sport with no reference to stardom or the potential backlash from the French media and created a side that eased their way through to the final with no further setbacks. Their star striker is a man unencumbered by the weight of big club bias, they all have absolutely superb hair and they were playing at home only a few short months after Paris experienced the worst kind of incursion into their sense of safety and wellbeing.

They needed it and they deserved it.


In contrast, Portugal won just one game in 90 minutes, their talisman scaled new heights of obnoxious during this tournament and the latest entry onto the FBI’s Most Wanted list this week is Ricardo Quaresma’s barber. On any measurable scale, Portugal represented all that is evil in modern football.

But if you accept and acknowledge this narrative (and these days it’s virtually impossible to follow football without doing so) you also have to accept and acknowledge Cristiano’s role within it. He’s not a naturally gifted footballer in the way Lionel Messi is generally accepted to be. His incredible work ethic has propelled him to the peak of physical and tactical prowess, his self-discipline and abstinence ensured he remains in peak physical condition and he’s devoted his entire life to leading the teams he represents. In Portugal’s case, that sometimes means dragging them by their ankles to the next round.


When Dimitri Payet slammed into Ronaldo in the first half, it was fairly obvious he was hurt. As the ball was passed around for the next five minutes, his inability to move freely was observed even by Danny Murphy, a man who later committed commentator’s suicide by uttering “good feet for a big man” without a hint of irony. It was clear the Portugal captain couldn’t continue and while he had a crack at it after having his leg strapped, he was done.

Here, now, it doesn’t feel like a victory for football. It feels like a victory for a giant poser who deserved to have his heart (and knee) smashed because he was nasty about a team we all loved. But in years to come, when the dust and moths have settled, we’ll feel differently.

We spend our lives moaning about our players, their unfortunate habits in casinos, hotel room and tax offices, with mobile phones and social media, their boredom and their baffling inability to play when it really counts. Cristiano Ronaldo is a model professional who has dedicated his life to playing the game we love to the best of his abilities, who listened when Sir Alex Ferguson told him what was required to become the best of the best and applied it, and in years to come, a European Championship victory will seem like the very least he deserves.


He’s still a prat, obviously. But England would kill to have a player like that on our side. Every day and twice on Sundays.